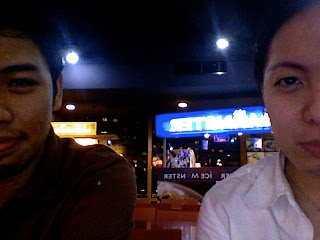 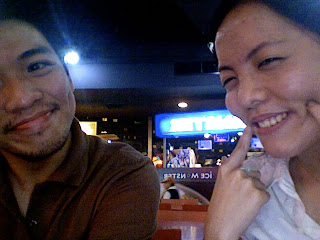 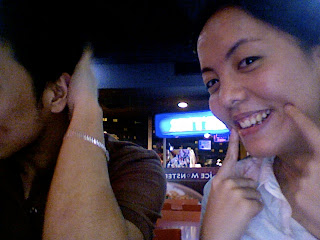 click me
brooded by JAm at 9:36 AM No comments:

casino royale is bloody good! i didn't expect it to be at par with the other james bond movies, or dare i say better than the others. i do admit that i was skeptic about craig filling the shoes of bond, mainly because he doesn't look like a bond to me, ice-cold-blue eyes buffed body and all. but surprisingly he as the new james bond embodies 007 as he should be, ruthless and suave, witty and charming. story-wise casino royale is a very typical bond movie so you shouldn't expect to be wowed of the (un)expected and (obvious) underlying plot twists. although what surprised me was the way they did a great job on humanizing james. the movie is full of action be it on the streets, a bathroom, a falling building or even at the poker table. but save for bond's sleek aston dashboard you won't be seeing much of bond's gadgets. (maybe because bond in this movie is a newbie double o agent?) what doesn't lack in this movie is the clever dialogue.

vesper: you know james... i just want you to know that if all that was left of you was your smile and your little finger you'd still be more of a man than anyone i've ever met.
james: that's because you know what i can do with my little finger.
vesper: i have no idea.
james: but you're aching to find out.
vesper: you're not going to let me in there, are you? you've got your armor back on. that's that.(?)
james: (mush mode on) i have no armor left. you've stripped it from me. whatever is left of me... whatever is left of me, whatever i am, i'm yours.

the short: this movie is a must see for james bond aficionados. for everyone else, see it to become a bond fan.

apocalypto is brutally good! it's braveheart meets the last of the mohicans meets the predator (minus the alien and the explosions) theme keeps you at the edge of your seat for almost the entire movie. although there's a bit of a lull, albeit berable, for about ten to fifteen minutes. but after that it's spear-throwing arrow-piercing rock-hurling mace-bashing knife-slitting bone-crunching non-stop-running action action action. i'd recommend you not to watch this movie if you have a weak stomach. (if you can watch braveheart's battle sequences without flinching you're good. otherwise go get another movie.) the morbid me finds it very entertaining whenever i see those blunt and not so blunt instruments decapitating flailing bodies. ehe. what i also liked in the movie were the costumes. (or lack thereof.) the tattoos were awesome, the body piercing were gruesome and the tribal "colors" were very distinguishable from other tribes. the way gibson built up the simple story was very absorbing, specificaly how jaguar paw's character developed from tainted-with-fear tribesman to a determined prophesized animal. (*mini spoiler ahead.) i especially liked it when jaguar paw emerged from the black quicksand(?) indomitable and unwavering ready to face his savage pursuers. coolness.

(oh, and i falied to mention that all through out the movie, genuine(?) aztec language was used. don't worry, sub titles included.)
brooded by JAm at 8:11 AM 2 comments:

remember this? hmmm... well i won't be able to sing the songs you've requested live, so i did the next best thing. ummm... you be the judge. (just don't be too harsh. please... hehe.)

god i hate february.
brooded by JAm at 8:21 AM No comments:

got a new blog here. it's a photo blog.

stole the idea from mapet. thanks pet! :D

don't expect weekly updates from this blog (since i don't have a camera...). but i'll try to post as much as i can.

it's been a while since i last bought something for myself, not because of necessity, but out of pure indulgence. and most of the time before i make a purchase i usually think it through if its worth it. well last saturday i bought something out of impulse. i bought me a copy of hiki's latest album, ultra blue. (i'm currently listening to it as i write this.) i was waiting for like forever for this album to be available here and finally it's here! (thanks comic alley!)

i'm quite relieved that the hiki that i learned to love is back. (her last album, exodus, was a complete and utter let down. but i still loved it none the less. but it was so not hiki. and good thing that it wasn't the "exodus" of her career after that album was released. made me think of the time when the eheads decided to change directions (and management) and released their all english album fruitcake. i can't help but to draw parallels between the two artists and i was hoping that hiki's comeback would not be the start of her decline. but hiki's comeback would be less complicated considering that she's a solo artist... hmmm... i digress. sorry about that.)

i'll leave you guys with a music video of one of her singles in ultra blue. this is my song of the moment. enjoy.

(baah... i was planning on posting her video "be my last" from youtube but apparently youtube is blocked today. o well... edit: not anymore! :D)

i really liked last nights episode of grey's anatomy. especially when merideth was doing her monologue thing. and talk about the ending. whoa, what a cliff hanger. but we all know what's gonna happen to george... (edit: oops... i meant george. hehe.)
brooded by JAm at 9:03 AM No comments: