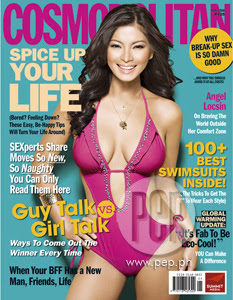 pa-next: it's like when you borrow a textbook from your classmate and you say "pare, panext!", it applies to all things, even girlfriends and angel locsin.
brooded by JAm at 8:04 AM 2 comments:

i caught mr. & mrs. smith on free tv last weekend. i have to say that i was quite entertained. though it got me thinking, what the hell happened to doug liman between this film, the bourne series and then he going out to make jumper?

i think it's kind of ironic and funny that vince vaughn was in this film as john smith's (pitt) close associate.

it's also cool that i tank is wearing a fight club shirt when he was being interrogated by the smiths.

props to angelina jolie for always looking gorgeous.
brooded by JAm at 9:33 AM 2 comments:

jumper
x: like jumper the story was all over the place; christensen & jackson; lame action sequences
#: the idea
*: david's pad

american gangster
x: too long; i would've enjoyed the movie more if there were more washington and crowe interactions
#: the ruthlessness of frank as a businessman; good performance from washington and crowe
*: frank collecting his money in the street with a jar

rambo
x: quite slow start; the main villain; the general, feels like a caricature, the cheeeesy lines
#: the action was unrelenting when it started; explosions; assorted body parts flying
*: rambo behind the gun

the assassination of jesse james by the coward robert ford

x: long, dragging and boring
#: the last 20 minutes of the movie; affleck in the last act
*: narration on the day before jesse james died

it's interesting, at least for me, to learn that i was born on the day that jesse james died.

x: i wished they have a longer list with more interesting things to do
#: freeman and nicholson on screen rapore; glad that sean hayes (jack in will & grace) is not gay; slimy edward cole
*: atop the pyramids

happiness is overrated.
brooded by JAm at 6:19 PM No comments:

i love talikodgenic girls... as long as they're not facing me.

i once said that chivalry is dead. true. but a new chivalry is now emerging. and it is most prevalent in public transportaion, i.e. the mrt. i dub this new animal selective chivalry.

i bet you most of the talikodgenic girls prowling the metro are victims of the selective chivalry beast.
brooded by JAm at 1:22 PM No comments: