do i need a reason?

for the longest time i hated fridays...

i just came home from the peyups christmas party.

it was interesting, to say the very least. i drank a lot of beer, which means i'm probably drunk right now. i'm only posting this because i've got some thoughts in my head, and i didn't want any of them to pass me by. my apologies for anything and everything i end up saying here.

i got to see lots of old faces, and we talked about lots of topics, like the 2004 up fighting maroons men's basketball team (marvin cruz is a superstar and we'll make the fucking final four if jay-r gets his fucking act together).

we also talked about how the member of the old fucking eraserheads are starving now, and how so many young people today don't recognize how fucking great they were. sure some people like their songs now, but they don't know the eraserheads like we knew the eraserheads. they changed our whole fucking lives man. they are the greatest rock and roll band the philippines has produced. ever. no argument.

i also came away with karl's urban dub ep, which i had been trying to borrow for the last month or so. it was funny, because most of the time, they were playing stephen speaks on the stereo. funny because we had an urban dub cd available, and we were listening to stephen fucking speaks.

oh, and i also so my ex girlfriend, man. seeing her really depresses the hell out of me. not because i still have feelings for her, but rather because i don't. i really don't.

i don't know if any of you guys can relate, but it's really hard looking at someone who used to mean the world to you (fuck it man, we were together for most of our college life, i thought i was going to marry this girl), and realize she means nothing. nothing.

most of the night, she was talking to my buddy frank, who came to the party with me. i wouldn't say this without all that beer, but i was joking that she was talking to frank because she was missing someone she'd rather be talking to, and she couldn't talk to that someone because her boyfriend was there.

i was just kidding, but she and frank were never, ever close back when we were in college. the conversation they had tonight was the longest they've ever had in their lives. what the fuck gives, right?

and i miss her too. not her, but the old her. the one who used to be my very best friend. she's long gone, because as i said, we tried to put it all back together, we tried a million times, but it's all lost.

that's why i hate seeing her. i'm glad she's happy now, with her new boyfriend and her new career and her new life and all, and i wish her the best. but i think it's fair for me to not want to be her friend, to not even see her at all. she's moved on, i've moved on too.

i could be over her, i could find someone else, heck, i could probably even be head over heels over that someone else, but the whole thing still depresses the hell out of me.

and that makes me sad.

wouldn't that make you pretty fucking sad too, to just be reminded of the whole thing?

speaking of frank, i hate him. ditched me for my ex, that bastard. we're not friends anymore. threw away nine fucking years of our friendship.

hehehehe. of course i'm kidding. i'm only writing the because he just recently discovered this journal, by following links from quirky. richelle happens to be celebrating her birthday today. isn't that great? go greet her now. i wish i could do this in more sober circumstances, but what the fuck.

happy birthday richelle. you already have everything anyone could wish for in the world. here's hoping you make every dream come true. 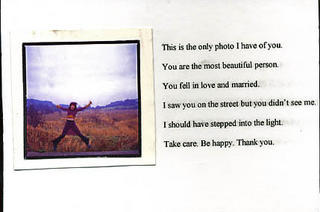