the plastic bag is the modern day tumbleweed.
brooded by JAm at 8:59 AM No comments:

as may we all know the pacquaio-cotto fight was held sometime last november. as such this coming sunday will be the first (usually) first sunday of december that doesn't have a scheduled pacquaio fight. so i'm in a pickle if i should go out on sunday and watch rocked's rock the riles. you see after pacquiao pummels his opponents to plow through victory which often finishes by noon, my friends and i talk about the fight over lunch. after lunch we go our separate ways to our homes. i take the mrt from cubao, (we've been watching pacquaio fights in gateway cinemas for the past 2 or 3(?) years), to ayala were i take the bus or ride a van to laguna. and for two (or is it three?) straight years i've been lucky to catch rock the riles at the ayala mrt station.

rock the riles is a gathering of local bands, musicians and artists spread out in eight mrt stations simultaneously performing to celebrate human rights. this year, as with previous years, boasts a hefty and loaded line up. 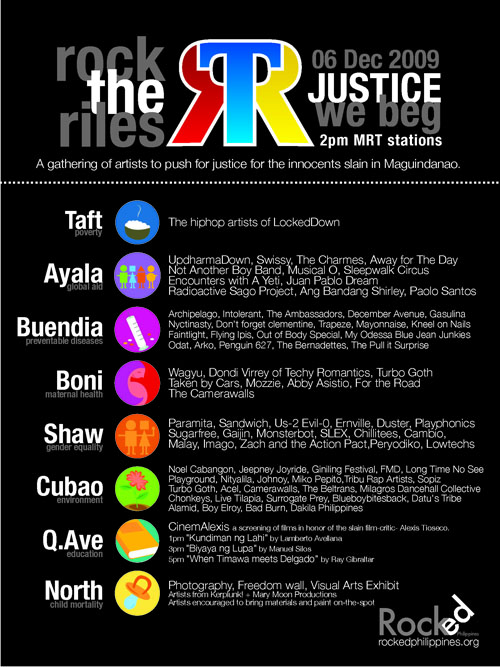 the ayala station and the shaw station looks solid to me. i'll definitely be there, that is if i can haul my lazy ass off my bed on sunday. show starts at 2pm. see you there kids!
brooded by JAm at 3:37 PM No comments: